Watch the genealogy shows on television. The searches appear straightforward with records obtained in clear chronological order. Occasionally, the host says, “We had to really look for this information.”  Subjects type a name into an online database, usually Ancestry, and a particular record for their ancestor appears.  At a county clerk’s office, the marriage book opens to the exact page with the person’s marriage record. These presentations simplify the process of genealogy. Yes, genealogy can be simple and straightforward. More often, our genealogy path seems more like a labyrinth or maze with frequent dead-ends and no clear way out. The ‘brick wall’ may actually be a hurdle or temporary road block.

Read “The Brick Wall Checklist” for an opinion about brick walls.

“Which begs the question: what is the difference between a maze and a labyrinth? Although considered synonymous by some, it is generally accepted that a labyrinth contains only one path, often spiralling around and folding back on itself, in ever-decreasing loops, whereas a maze contains branching paths, presenting the explorer with choices and the potential for getting very, very lost.” (Source: https://theconversation.com/how-to-escape-a-maze-according-to-maths_71582:  accessed 10 Feb 2018)

Some characterize genealogy as a puzzle with missing  pieces. How do you put a genealogy puzzle together? Read this blog post for some ideas:  Finding all the pieces to the puzzle.  For me, the image varies with each family group/ person and the specific goal.

I have been doing genealogy for over 20 years. Last year (2017), I started a Genealogy Do-Over by carefully reorganizing and reviewing files. Each file contains multiple records and notes. This year, I focus on my mother’s family (Tucker-Maurer) with forays into my husband’s family lines (Ellerbee-Simmons and Johnson-Reed). The person of the week is Rosina Maurer, sister of my great grandfather, Herman Maurer, and the maze that I found myself in.

The first rule of genealogy is “Start with what you know.”  In this case, I started with a handwritten family history by my great-aunt, Viola Maurer Tucker, written in the early 1980s.  [1]

“Valentine & Katherine Maurer had 5 children:  Herman, Katherine, Joseph, Rose, Edward. . . . Rose married Jacob Smetz.  We lost track of them after Herman (our father) died.  They had 2 or 3 children and lived in New Jersey.”

Keep chronological journal, handwritten or computer-based, of when and where you find information even if information is conflicting or negative. This journal / research log will keep you from retracing your steps later. Transfer appropriate information to your family tree. On family tree, write notes about conflicting and negative information.

With this basic information, I am now ready to enter the maze to find Rose/ Rosie Maurer Smetz. First, I went to Ancestry’s online database and typed “Jacob Smetz” as Rosie’s spouse.  No records found for Jacob Smetz or any children.  A dead-end, return to entry point.

Next, I remembered a document already in my files -probate record for Anna Katharina Maurer, Rose’s mother, who died in 1899: [3]

Did Viola have Jacob’s name wrong?  Try another direction.  Begin again with 1900 census. Changed Jacob’s surname to ‘Schnitz’.  – no results!!! Changed residence from New York to New Jersey. Again, no results! Back to entry point. Record each direction and results in journal.  This feels like a roadblock, so I end here to return later.

Start over.  Review available information again before entering the maze.  From the probate records, I saw, for the first time(?),  ‘Rosina’.  Try  ‘Rosina’ again with both ‘Smets’ and ‘Schnitz’.  Nothing found on Ancestry website. There have to be records for this family!

This record opened the 1900 census for Jacob and Rosa Smets in Stonington, Connecticut [5]:

Jacob & Rosa apparently moved from New Jersey to Connecticut, about 140 miles,  between April 1899 (date of her mother’s probate) and June 5, 1900, date of 1900 census.  Arthur, their youngest son, recorded as born in Connecticut in August 1899, so the family moved during Rosa’s 5th or 6th month of pregnancy. I now have the names for 3 children and an interesting twist.  Why did they move to Connecticut? Jacob’s listed occupation as a weaver in a velvet mill probably answers that question.

Another child, Robert, born in 1901 in New York. Jacob & Rosina moved from Connecticut back to New York before Robert’s birth in 1901.

Circled back to Ancestry website, and found Jacob & Rosa in Brooklyn, New York, per 1905 census. [7]

This again confirms their move from Connecticut back to New York.  It’s  late at night and I am stuck in the maze.  Time for bed!

Still in the maze but making progress. Continued to circle around the Ancestry database and discovered another opening:

The family did live in New Jersey! Followed the tracks of Jacob and Rosa’s children with some success (to be reported in a later post).

Changed direction to Find A Grave for Smets/ Smetts. Many possible detours (i.e. names) but no entries found for Jacob, Rose, or any of their children.

Changed direction again – to Newspapers. Com website. Nothing found for Jacob or Rosina Smets.  Then, three large openings in the maze after using ‘Smetts’:

According to German naming traditions,  first names given at birth were rarely used and people were usually known by their 2nd name.  Could ‘Rosina’ be her middle name?  If so, what is her first name??

Possible clear path out of the maze, except for the mention of Henry Renk. What is his relationship to Rose?  Definitely a  BSO to be explored another day!

Retraced steps (again!) to  recheck for page numbers of newspaper entries (forgot to record these earlier).  Looked around the location one more time and discovered a previously overlooked item: 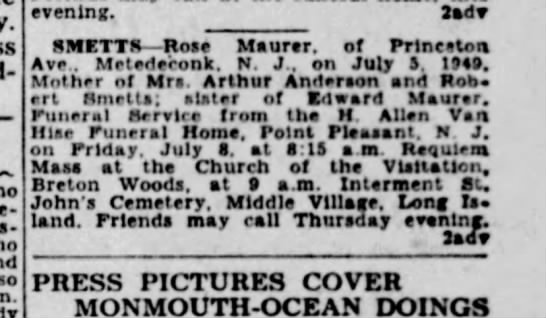 Exit point of the maze.  Now, the final test question:  Was information given at the entry point proven?

“Rose married Jacob Smetz.  We lost track of them after Herman (our father) died.  They had 2 or 3 children and lived in New Jersey.”

If you are interested, view Rose’s life summary: Maurer_Rose_Timeline2

What began as a routine task soon became an intriguing and frustrating study. I often run into name variations but there seemed to be more twists and turns than usual for Rose’s family. Maybe I just wasn’t picking up on clues. I originally viewed this as a zig-zag path with many choices of direction. Then, I realized that I was going in circles. The concept of a maze seemed more fitting as I reached dead-ends and had to retrace my steps. Before starting my Genealogy Do-Over, I rarely followed through for the siblings of my direct ancestors.  And, I stopped quickly when I could not access readily available information.

What helped:  handwritten family history provided by great-aunt Viola, even with its minimal information. Tools and techniques learned during the past year. Slowing down and documenting everything.  Searching for additional information before finishing this post.

What I learned:  Go back to original data, even when you think that you have learned everything you can from it. Thorough documentation takes more time but helps by forcing review of information more than once. It’s OK to put research aside for days, weeks, or months.

[10] Letter of admin for Joseph Smetts.