My post this week is very short. One week ago today, a family member died. Jerry Donald Ellerbee, aged 81 years, 1 month, 1 day, died on 17 February 2019. He died peacefully in his sleep at home. I am blessed to have known Jerry as my father-in-law.  His commitment to family reaches far.

When I was a novice genealogist, Jerry shared many stories of his family, especially the Ellerbee side. I remember walking the Mount Hope Cemetery in Wells, Texas, with him. He pointed out graves of many relatives and knew exactly how all of the distant cousins were related to him. I am the proud owner of an Ellerbee family history because of him.

Jerry related that he knew his maternal grandfather’s name, Clay Simmons, but little else about the Simmons family.  So, I decided to find out for him. In 2014, my husband and I traveled to east Texas as part of that search. We discovered that the Simmons family had migrated to Texas from Alabama just before the Civil War.

I even found an Oklahoma connection. Jerry’s  third cousin, Gappa Malachi Rushing,  moved to Oklahoma before statehood and practiced medicine in Durant, Bryan county, Oklahoma.  For Christmas, 2014, I gifted a scrapbook about his Simmons ancestors to Jerry. 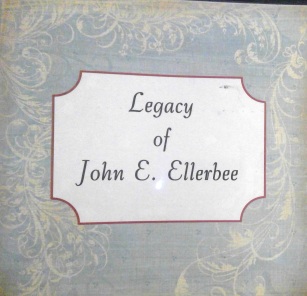 How do you pronounce “Maurer”? According to mom, the name sounded like “more- er”. As with other stories about mom’s family, I started with Great-Aunt Viola’s handwritten family history. [1]  Part of my grandmother’s ancestry reads:

My focus was clear – to discover the story of Valentine and Kathrine. Spelling of Kathrine’s name varies and is reported here as spelled on each document.

The 1860 census[3]  for Valentine and Catharine Maurer provided an early clue. The family appeared in Galloway, Atlantic county, New Jersey on 15 August 1860:

Since both children were born in New Jersey, Valentine and Catharine apparently immigrated to the United States by about 1857.

Where was the family in 1870? I am still looking! See “Name variations in census records: Maurer & Klee”  In 1880 [5], they still lived in Brooklyn, Kings county, New York.  Four children had joined the family (as transcribed):

The six years difference between the births of Herman and Kattie suggest that Valentine may have served in the Civil War. Names of the children on these two census records correspond to Viola’s information except for one item. She did not record any information about the oldest son, Valentine. Viola may not have known about Herman’s older brother or had forgotten him.

Family origins: Baden is in the southwest corner of Germany near France. This western German border, also known as Alsace-Lorraine, alternated between French and German rule throughout its history. Prussia, in the northeast corner of Germany, is now part of Russia.

In 1883, Valentine and Anna Katharina wrote in the autograph book of Anna Klee, Herman’s future wife. Read more about Anna’s autograph book in “Sources” section of this post. Both entries were written in German. Her signature as  “Anna Katharina Maurer” confirms use of both names. [8]

Valentine may have traveled back to Germany in June 1888 [9] then returned to the United States in September 1888.[10]  The traveler’s age of 61 suggests a possible identification.  Did this journey occur because of the death of his oldest son in March 1888?

Valentine Maurer, age 71 years 7 months 9 days, died on 21 September 1898 in his home, 169 Hopkins Street, Brooklyn, Kings, New York. [12], [13]   His calculated birth date is 12 February 1827, same date recorded by great-aunt Viola. I don’t know how she learned of his birthdate. She didn’t report a death date so she possibly did not have a copy of his death certificate. Other interesting items from Valentine’s death certificate:

Now, I turn to Valentine’s wife, Anna Katharina.  Her name is listed as Catherine Korselious[14]  and Katherine Korzilous[15] on the death certificates for two of her children. Viola’s spelling of her surname as Korzelins is similar.  Census records suggest that she was born in 1827 or 1828 rather than 1824 as reported by Viola.  The actual date of 4 November is perhaps true. When did she immigrate to the United States?  Did she and Valentine “meet on the boat” per oral family history?  Anna Maurer died on 12 February 1899 in Brooklyn, New York. [16]  Probate records, both filed on 12 March 1899,  name their children and current residences- “Herman Maurer. . . Katie (wife of Stephen) Scheffel, Joseph Maurer and Edward Maurer of the Borough of Brooklyn, County of Kings, New York and Rosina (wife of Jacob) Schnitz of Jersey City, New Jersey.”

Writing this post helped me with a timeline perspective.  Clarified some items.  How did Viola know about Valentine Maurer’s birthdate? Is there a missing family Bible? When did Anna immigrate? I continue to be thrilled that great-aunt Viola was such a good historian. Even though her manuscript lacked sources, I have found many documents that support her information.  I share my information with cousins through this blog and other written materials. As always, there are still questions. I partially met the reasonably exhaustive criterion of the Genealogical Proof Standard.

What helped:  Having copies of death certificates for Valentine, Valentine II,  Herman, Katie and Joseph. Probate records for Valentin and Anna Katharina, both filed on the same day.  Recent careful review of research.

What didn’t help: Not having 1870 or 1875 census for family. I looked again on two databases. A page by page review of the Brooklyn census seems to be the next step.