With this post, I continue the story of one blended family in my husband’s family tree.  Briefly, I started with James T L Powell and his 1st wife, Deborah Daniel (nuclear family #1) then told about James T L Powell and his 2nd wife, Catherine Brown. James and Catherine are my husband’s great-great grandparents on his dad’s side.  Now, I turn to the other nuclear family—Elias I. Barker and his first wife, Launa/ Euna Barber.

To catch you up, three posts began the longer story:

1 January 1863 – Battle of Galveston. The seaport returned to Texas control.

13 May 1865- Last land engagement of the Civil War fought at Battle of Palmito Ranch in south Texas, more than a month after General Lee’s surrender.  Elias Barker was 12 years old.

30 March 1870 – Texas readmitted to the Union.  Reconstruction continues until about 1874.

March 1861. From their bed, eight-year-old Elias Barker and his brothers tried to hear what their parents were whispering about.  But they couldn’t make out any of the words. Whispering adults only meant one thing—trouble or a new baby. The next morning, Papa, his gun and knapsack with some food were gone before the sun rose.  Elias’ mother answered his question before he could even ask- “Papa’s gone hunting. He’ll be gone for a while.  You children eat breakfast then go do your chores like usual.”   But, Momma wasn’t smiling today like usual.  Later that day, Elias heard his momma talking to Mrs. Edwards  about “secession” – whatever that meant.  Some men and older boys had already left their homes and families to join some kind of fight. Life would not be ‘usual’ for a long time.

Those years changed Elias’ life in myriad ways. Death visited the community on a regular basis.  The color of black was everywhere. People anxiously gathered to read, or listen to, the local newspaper each time it was put on the wall outside of the newspaper office.  The words ‘killed’, ‘injured’ and ‘missing’ became everyday part of the community’s vocabulary.  Elias longed for a time without so many hardships.  Life on the farm went on, pretty much as usual.  Some of the men and boys returned but not all.  Those who returned had both physical and emotional scars.  Did Elias’ family lose a father, brothers, cousins? I’m not sure but it is certainly possible.

Elias had his eye on Euna Barber since she was a girl.  When she turned 16, Elias asked her daddy for her hand in marriage.  They wed on August 13, 1874, in Milam county, Texas.  Children did not come easily to the young couple.  Elias and Euna moved to Lee County, Texas where their first surviving child, Tempie D. Barker, entered the world in February 1880. More children quickly followed:  Arthur in March 1882; Isaac in August 1884; James Milton in September 1886; Cora in January 1889; and Katie L. in February 1892.  Six children in twelve years, a typical pattern for many couples of that era.  They led a simple life as farmers in east central Texas. Life as usual as it could be in eastern Texas after the Civil War.

Tragedy struck, almost without warning. After Katie’s birth, Euna died, probably from complications of childbirth. At age 39, Elias found himself a widower with six children under the age of 12, including an infant. Elias’ usual life again turned upside down. Thirty-two year old Catherine Powell, widowed two years earlier, was raising three children of her own. A marriage of convenience to meet mutual needs? Perhaps. Whatever the reason, Elias and Catherine married on 1 September 1892 at Cherokee county, Texas. Catherine again became a tie joining two families.

Next post:  The rest of the story- Catherine Brown Powell and Elias Barker.

Records for Elias and Euna/ Launa before their marriage elude me.  Typing in names and dates did not produce immediate results.  Family Search website identified Isaac Barber and Tabitha Gardner as her parents. 1870 census for Isaac and Tabitha showed an 11-year-old daughter named Rohda [Rhoda?].  No other hints or shaky leaves have presented themselves.  I manually searched the 1870 census for Milam county, Texas- all 230 pages of it- and ate only 2 cookies during that process. Neither Barker or Barber found on 1850 or 1860 slave schedules for Milam county, Texas.    Next step:  consult print copy of alphabetized census records at Oklahoma Historical Society Library in Oklahoma City.

What I learned:  Tracking children who aren’t on any census record is a challenge. I found Arthur only because he is buried in the same cemetery as his parents and stepmother, Knowing the names of Elias and Euna’s parents doesn’t really affect their story as a married couple but is a ‘nice to know’ item for me.

What didn’t help: Frustration at not being able to find or confirm the parents of either Elias or Euna. Finally recognized that this is a BSO for another day. 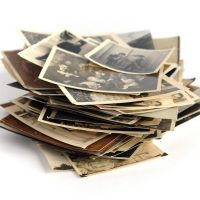